You have probably been to one of Lou's drug testing facilities at one time or another to take a drug test but what you may not know is the story behind his business and life in Odessa. 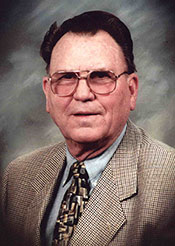 Lou Linneman remembers stepping out of the train one day in 1953 with all his belongings in a trunk. As he was stepping out he was gushed by a red sandstorm and he was wondering at the time if it was a good idea to stay in Odessa. It was during the oil boom days so the housing was limited. At that time there was a Café on 4th and Grant - Matthew's Café. They had some small rooms in the back for rent so Linneman decided to move in until he found a place of his own.

During World War II Linneman served in the Navy, which is where he was first exposed to the medical field. "I love the medical field," said Linneman. In April of 1966 he decided to open the first Lou's Clinical Lab located at 601 4th Street and was 400 square feet. Later in 1991, he relocated to 318 N. Alleghaney, a 900 square feet facility and was there until 1996.

In 1992 Lou's son Stephen, president of Lou's Clinical Lab, Inc. Drug Screen Compliance & Consortium of the Southwest, came to work for his father. That same year the Lab decided to join the Chamber. Stephen says that being part of the Chamber of Commerce has helped their business, it has also given them recognition in the community.

Today, they have 4 locations in Texas including; Midland, San Angelo, Big Spring and Lubbock. The Odessa location houses the corporate headquarters for Lou's Clinical Lab, Inc. They also do business in Houston, Abilene and New Orleans. Although Lou's Clinical Lab has grown extensively since 1966, the family owned business continues to treat all their clients in the same friendly manner. Whether it's an account that consists of one client or an account that consists of 22,000 clients.